Nikolai Kölbl is a man who expresses his thoughts through his body. He gesticulates wildly with his hands in the air, bends his body back and forth, his right leg bobbles continuously up and down all the while moving the salt shakers in front of him on the table from left to right just like pawns in a chess game. To sit quietly and lis- ten is not really his thing. The thirty-six-year-old chef and restauranteur thinks fast, talks fast and lives fast. No wonder the Viennese gastronomy scene could not keep up with him in the begin- ning. Nevertheless, if you want to make the best burgers in town, you always have to be one step ahead of the others. With a shoe size of forty-six and a stride length of a marathon runner, the tall Berliner has changed the Bohemian cuisine of ‘Weinschenke’ with ease in order to serve Vienna his exquisite burgers. His creative spirit looks back on seven restaurant openings in nine years: A success story in four acts. 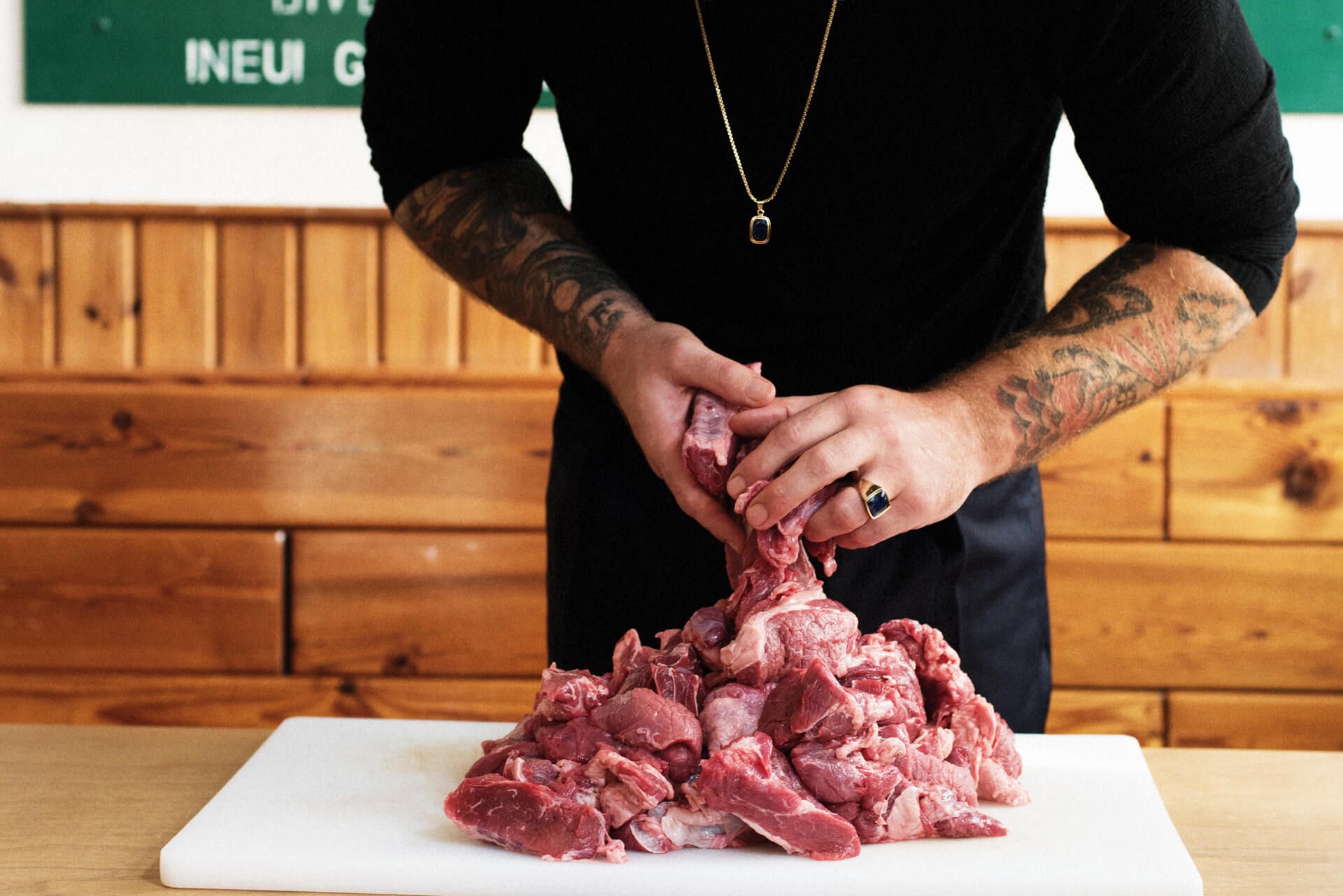 Kölbl grew up in the early nineties in the streets of Kreuzberg. Raised in a house where the doors were always open and where his mother’s friends came in and out, however, without a trace of his father. In his teenage years, Niko dropped out of school and started looking for new role mod- els. That’s when he descended down the wrong path and became the uprising star of Berlin’s crim- inal milieu. “The business was well-organised, our network spread across the city.” The many tattoos on Niko’s skin tell a story of his turbulent times. One day, the authorities knocked on his door and arrested the successful but criminal mind. “The cops had me by the balls, so I had to decide to either continue and fall apart or start over, from scratch.” And so, he exited the path of a criminal and began his journey in Berlin’s gourmet kitchens.

“I did not graduate from high school, I had no education”, so Niko decided to do what felt natural to him: he became a cook. He went straight to the most established restaurant in the city, applied for a job there and got it–without any CV or a clean criminal record. It was his determi- nation that impressed the star chef, Kolja Kleeberg, and so he hired the young Kölbl in his restaurant ‘Vau’ at Gendarmenmarkt. “That was thirteen years ago,” he recalls and for a brief moment the twitch- ing of his right leg stopped. Right after, Niko jumps up and continues, “Show me how it’s done and I will do it better. That was my way of learning in the kitchen.” Evidently, his way to learn and work in the kitchen brought him even further. In Michelin award-winning restaurants he first watched how the dishes were cooked and then he recreated them himself. Nevertheless, he always questioned the food that was made in these restaurants and started creating his own dishes all over Berlin. His dishes were made from simple and regional products, but plated and served elegantly. He stayed true to this concept. Years later, he packed it along with his seven belongings into his old BMW 5 and went to Vienna. Since then, he stayed in the city, “because of love, what else?” 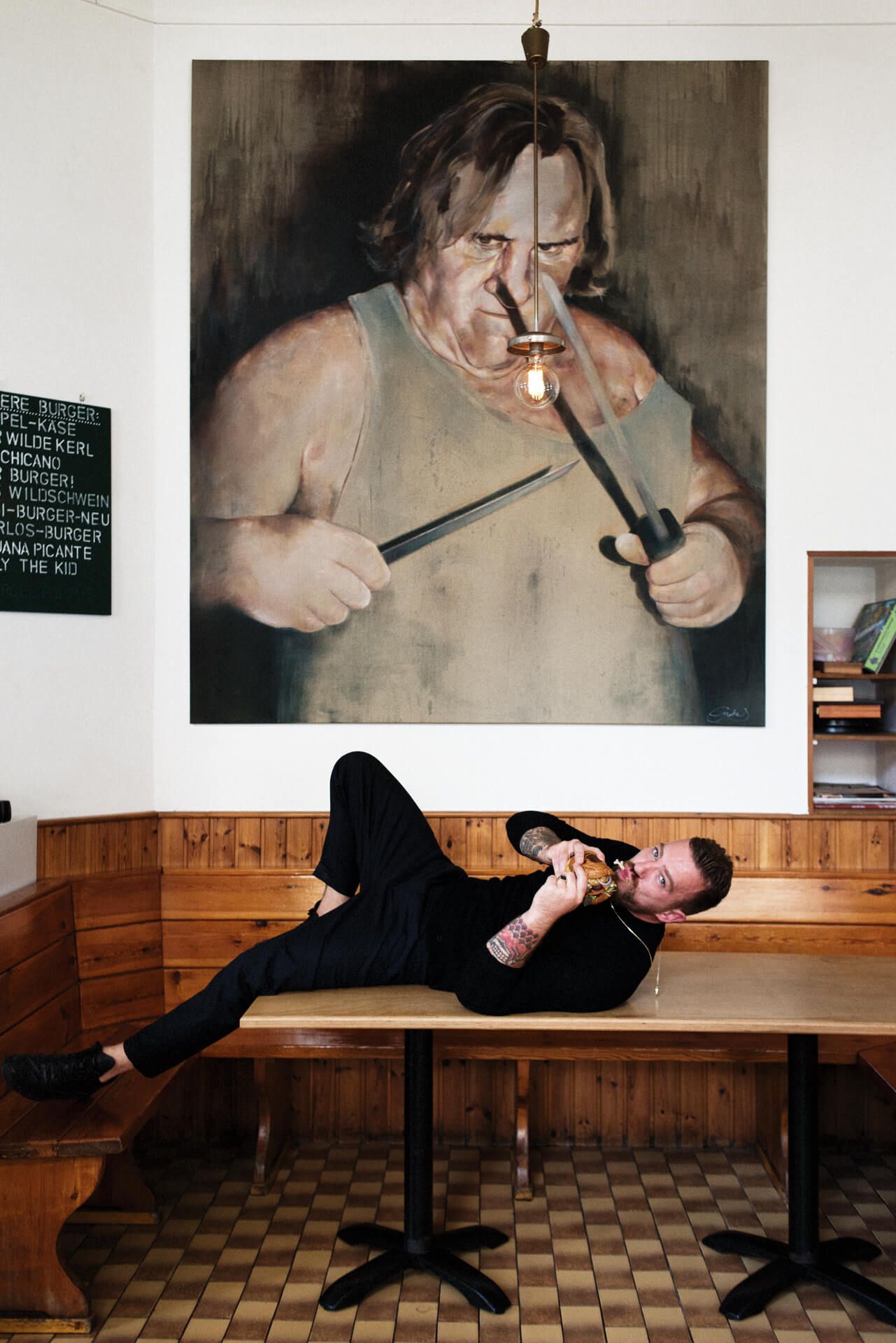 Once he arrived in the Viennese dis- trict of Magarethen, it didn’t take long for him to walk past ‘Weinschenke’ in Franzengasse 4. He liked what he saw and noticed the potential that lied dormant inside the old town tavern. But first, he started as a cook. Hearty food ends up on the plate, “but prepared at a very high level” and served in finely composed menus. The bohemians 46 (Bobos) of the local cultural scene appreciated his cooking skills and declared the guest room of the wine tavern their new living room. Then everything changed: Niko started to throw burgers onto the grill, the ones that Vienna had never seen before. Meticulously cooked, exquisitely garnished and beautifully decorated. At the same time, you can hear old-school rap playing from the kitchen loud- speakers free of charge! Furthermore, the tavern offers an exquisite variation of wines so that the Bobos can continue to sip on their wine glasses. Soon after, the word started to spread in Vienna that a German is making the best burgers in town. That’s all it took for crowds to come and satisfy their cravings for beef–from the cultivated hipster to the typical grumpy Viennese. “In the first year, we were so busy that people almost overran us,” Niko remembers. The unusual burger patties were so popular, that from then on, you could only find bloody beef on the menu. You started reading names on the menu like, ‘Vitu, the wild boar’ ( juicy wild boar with caramelized red cabbage served in crispy bread) or ‘Tijuana Picante’ (burger served in corn rolls with salsa that is really spicy). The nostal- gic and wood-paneled interior design of the tavern was kept, “because it was such a beautiful contrast to the roasty burgers that were sold in the tavern.” 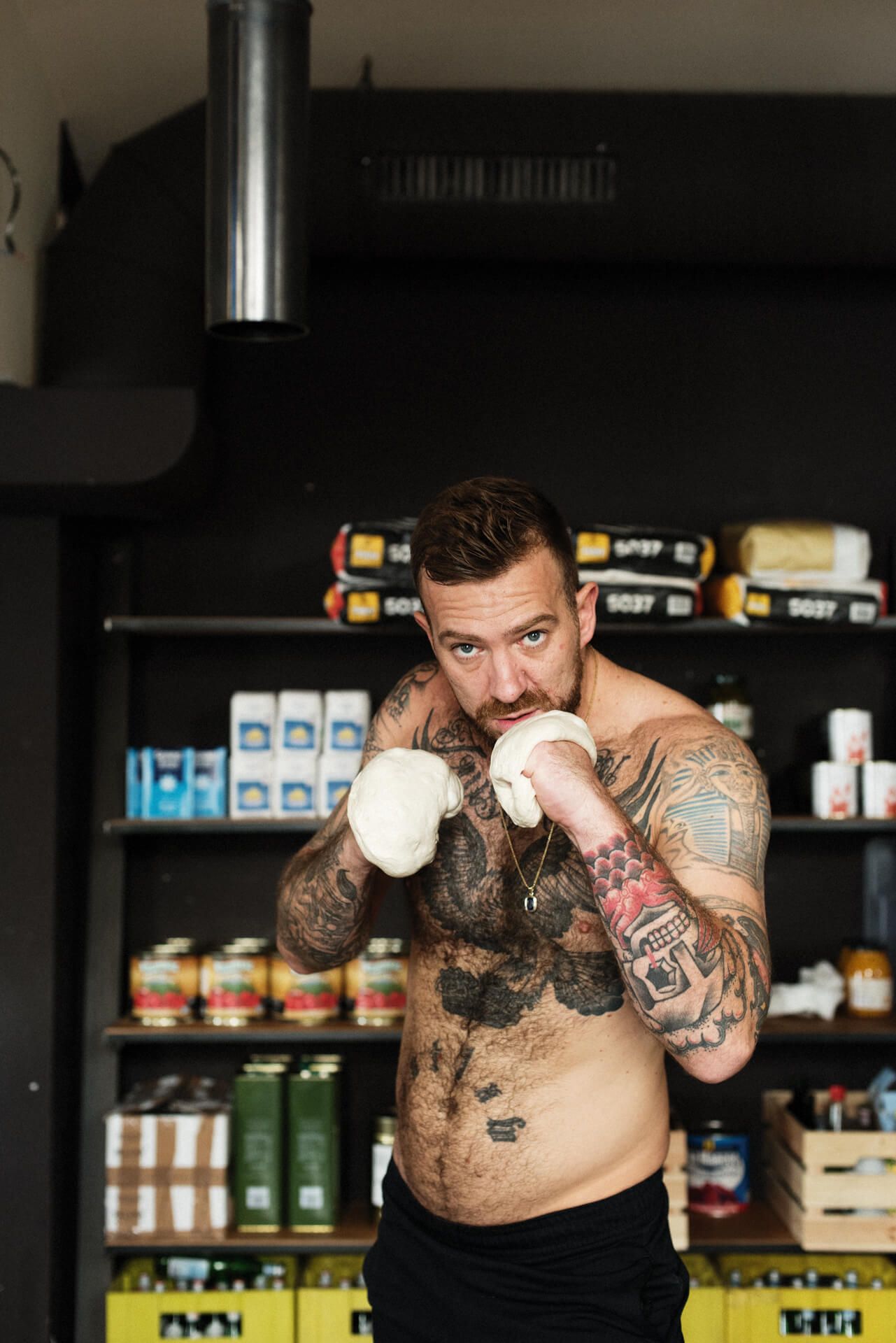 ‘Turbo-gastronom’, that’s what they call Kölbl now. In only three years, Turbo-gastron- omy managed to open six restaurants. His latest clue ‘Pizzaria Randale’ at Kettenbrückengasse is a conceptual place where Naples’ tomato-marinade is topped by a Viennese Blutwurst, while people move to rhythmic Berlin Techno-Beats. But a life full of rush can also take a toll on the human body, which even the tall and strong Niko could not 47 withstand. He would have almost gone too fast, if he hadn’t pulled the emergency brake on his life. “I was completely burnt out and empty,” he says dryly, moving the saltshakers and pepper mills away from him. He disappeared from the scene for twelve months, separated from his fiancé, travelled alone for several months in Sri Lanka, cleaned his body and mind and returned to Vienna–with new ideas and concepts in his suitcase. Short after, he meets ‘an old friend from Germany’ again. He falls in love with this ‘friend’, converts to Islam and marries her in front of Imam. He proudly shows the sapphire ring on his finger. He feels comforta- ble in his new role and is full of energy. He is plan- ning a second Pizzaria ‘Randale’ in ‘Babula-Hotel’ in the second district and another restaurant with the name ‘Zum ewigen Träumer’, which translates to ‘the endless dreamers’. He is now leaving his turbulent years behind, “okay, maybe not all the way,” he says while grinning. Sitting quietly and remaining silent just isn’t his thing so let’s just say: Vive Randale!